You are here: Home › Press

“Oehlers can match his ability to think on his feet at speed over sustained choruses with a touch on ballads that contrasts his up-tempo assertiveness with vulnerability and tenderness”– Rob Adams, Scottish Herald

“He seemed to be his own accompanying trio, dazzling was the alteration between his melodic lines and the phrases that built up the supporting harmonies”- Alyn Shipton, BBC Jazz presenter at the World Saxophone Competition.

“a combination of strength and sensitivity”– Jessica Nicholas, The Age

“a creative, powerful and sensitive musician, with stories to tell”– Jim Mcleod, 24 hours

“Oehlers has a full command of the horn, a very warm tone, and a fondness (and surety in) the upper register that recalls Joe lovano”- Jason Bivins, Cadence magazine

“This was contemporary original jazz of world standard, played by highly talented artists demonstrating beyond all doubt that Australian groups such as Oehlers’ quartet are producing important works and powerful performers able to stand tall on any stage” – John McBeath, The Australian

“Jamie Oehlers proves his position as a player of international stature…in the fierce music that follows, Oehlers picks up from Tinkler in an extraordinary solo of great passion. Yet elsewhere, on “Solace” and “Departure,” he can play the tenor ballad with equal mastery” – Bev Stapleton, All About Jazz

Click on the thumbnail to view the high resolution images for publicity. 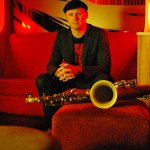